Discipling the Next Generation Now 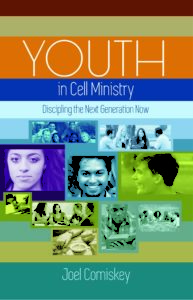 John Alves accepted Jesus when he was eleven years old in a children’s cell group at the Vine Church in Goiania, Brazil. Soon afterwards he attended a spiritual retreat called “Encounter” and God healed him of bronchitis. After baptism at the age of twelve, he began a discipleship course which eventually led him to lead a youth cell group, which he multiplied three times.

As he coached the multiplication leaders, God placed a calling in John’s heart to become a pastor. He received various prophetic confirmations, and in 2011 he entered the church’s equipping for future ministers. After two years of equipping, John became a fulltime pastor overseeing a network of youth cell groups.

John is now twenty-four years old and one of the thousands of pastors and missionaries from the Vine Church who were discipled as young people and now in ministry. The Vine has a razor sharp focus on discipling the next generation and a clear path to make it happen.

The good news is that the Vine Church is not alone. Many churches, including the ones highlighted in this book, are effectively discipling youth and preparing them for future ministry. This book describes how churches do this and why cell group ministry is perfectly suited to disciple the next generation for Jesus.

I began following Jesus in September 1973 when I was seventeen years old. A few months later, I was in a small group that met on the Millikan High School campus in Long Beach, California. I learned to pray out loud in the group, and there was freedom to ask questions. God’s Word became alive to me as I interacted with others. I had a place to go when I was discouraged and a team to help me live the Christian life on the Millikan campus.

When I was nineteen, I started leading a cell group of predominantly seventeen to twenty-three years olds who met in my parents’ house. We grew together, experienced trials, debated theology, discerned false teaching, and most of all developed deep, lasting friendships. We learned to overcome conflict, love one another in practical ways, and allowed God’s Spirit to work among us. This was our group, among our own peers, and we felt like God was speaking to our generation each week in the cell group.

Bob Burtch was the co-leader who also led worship. Because we were good friends, I accepted his critiques of my Bible messages, although they were hard to take. I didn’t know much about God’s Word, but I shared what I knew, and God poured more into me. Often my teaching was shallow, but the cell group was more than my Bible teaching. We shared life together and grew spiritually as we challenged each other.

One evening we invited Ginger Powers, a missionary smuggling Bibles into East Germany, to speak to us. Her words and vision impacted all of us. Through her words, God lit a fire in my heart for missions. As a nineteen year old, I was ready to go with her to Germany, but God had other plans. I didn’t realize that a career in missions might require more preparation than simply packing my bags and leaving North America. I eventually did leave our cell group to participate in a short-term Youth With A Mission trip, which led to Bible college, and eventually career missions. Although the group sent me off, we gathered together for fellowship during my Bible school breaks, and even to this day, I maintain contact with some of those original group members.

Jesus himself chose the small group atmosphere to prepare his disciples. He spent time with his young followers, interacted with them, and taught them to love one another. He then said to them, “All authority in heaven and on earth has been given to me. Therefore go and make disciples of all nations, baptizing them in the name of the Father and of the Son and of the Holy Spirit, and teaching them to obey everything I have commanded you. And surely I am with you always, to the very end of the age” (Matthew 28:18-20). The disciples knew exactly what to do. They started home group ministries that multiplied and changed the Roman world. And home cell groups are just as essential for disciple-making today.

When Jesus gave the Great Commission to his disciples, they knew exactly what he meant. After all, Jesus practically demonstrated it. Jesus developed his own group of twelve and shepherded them for three years. In that cell atmosphere, the disciples were molded, shaped, trained, and then sent forth. These same disciples became the key leaders of the early Church.

Not only did Jesus minister with these disciples over the course of three years, but he then sent them into homes to establish house churches that would multiply and infiltrate the surrounding communities (Luke 9 and 10). In other words, house-to-house ministry in small groups was the way Jesus made disciples, and he expected his disciples to do the same. The houses or apartments were very small in the ancient world, and they were excellent meeting places for making disciples.

Small groups are still the best training ground for future disciples. Jose Abaroa, youth minister at Cypress Creek Church, in Wimberley, Texas, challenges his young people to become disciples by leading small groups called community groups on junior high and high school campuses. He expects a lot from his youth, and they have responded by leading and multiplying youth cell groups. The campus junior high cells meet at lunch time for one and one-half hours. The groups are dynamic, fun, and empowering. Those leading the groups grow more than those attending as they are challenged to trust Jesus to use them. Jose confidently believes that his students are capable leaders and can effectively minister to other students, while becoming disciples in the process.

Jose also gathers the youth cells together on Sunday as a congregation. “They need to know we’re going to be there for them,” he told me. Jose is passionate about cell ministry because he himself was born again and discipled in a Cypress Creek small group meeting on campus at Texas State University in San Marcos. Jesus transformed Jose in the community group, and he wants others to experience Christ in the same way, including the junior high and high schoolers.

Some react negatively to the word disciple but the original meaning simply means pupil or learner (note 1). After Christ’s resurrection, the word disciple was broadened to include such words as believer, saint, Christian, and brother or sister in Christ. Why? Because after Pentecost, God established the Church, the gathering of believers, to be the main place where discipleship occurred.

Youth cells are an exciting way to make followers of Christ who are molded, shaped, and transformed in the process. We’ll discover in this book how churches disciple young people through cell groups and larger youth gatherings. We’ll see how churches transition to youth cells, avoid common mistakes in youth ministry, and even plant youth cell churches to make disciples worldwide.

1.In the Greek world, philosophers were surrounded by their pupils. The Jews claimed to be disciples of Moses (John 9:28) and the followers of John the Baptist were known as his disciples (Mark 2:18; John 1:35).