I overworked one spring to the point of exhaustion. I didn’t faithfully keep my day off, didn’t take care of my body, and eventually caught bronchitis. Yet I had a commitment to do a small group seminar in Greece during this same time period. While in Greece, I did my best to teach and consult each day, but I barely had enough strength to keep going. And each night I suffered long hours of wheezing and coughing. Has something similar happened to you?

I’ve learned the hard way that I need to pace myself to succeed over time. Coaching is helping a leader stay focused and balanced in life. If you’re going to help someone else, you first need to help yourself.

And the first place to help yourself is by receive coaching from the King of Kings. As He enriches you, you can pour out what you receive to others. Romans 15:5 says, “May the God who gives endurance and encouragement give you a spirit of unity among yourselves as you follow Christ Jesus, so that with one heart and mouth you may glorify the God and Father of our Lord Jesus Christ.” As the God of endurance and encouragement fills your heart, you can then effectively minister to others.

I’m convinced that the most important book I’ve ever written is called An Appointment with the King. I believe in Appointment with the King so much because it focuses on how to have a daily quiet time with God, getting know His person, His Word, and His presence. In the quiet time, we worship the King of Kings, listen to His voice, and receive direction for our day. I’m convinced that the most important discipline of the Christian life is spending daily quality time in His presence.

God also wants us to take one day per week to rest our bodies. I like to get things done. That’s the way God’s made me. Yet, several years ago when I was planning how I could get more things done, the Lord convicted me by showing me that He wasn’t so concerned about my “getting things done.” He showed me to stop “doing.” To not get things done is hard for me, but I really couldn’t argue with the clear Scriptural principle of taking one day of rest. 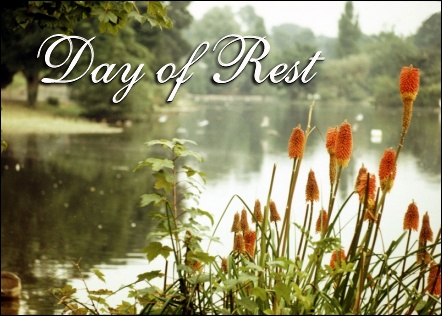 Scripture doesn’t talk about a partial day, half-day, but rather a full 24-hour day of rest. One day out of the week we need to do nothing. After those six days, we just naturally run out of gas. That’s the way God made us. If you kick against God’s norms, you’ll pay the price eventually.

Now I haven’t always kept that commitment due to my own neglect or schedule conflict. Yet, I’m more convinced than ever that taking a day off is one of the keys to wholeness and effectiveness. Are you taking your day off?

I talked to one leader who refused to take a day off because he insisted that those who he was counseling needed him too much. He felt it would be sinful to neglect the dysfunctional people that needed him. He couldn’t imagine selfishly thinking of himself and not being instantly available 24/7 for those who needed his counsel. “But you’re not going to help them,” I told him, “if you’re frazzled and burnt out.” He just couldn’t accept my counsel. Yet, in reality those who needed him so badly would be better served in the long run if he took a day off.

To coach effectively, you need to seek the Lord and take a day off.