I, Joel Comiskey, have the privilege of coaching churches in cell-based ministry. Each week I talk on the phone to pastors and try to help guide them in making cell ministry work in their churches. One of those pastors is Michael Sove, cell champion at Allen Memorial Baptist Church in Salisbury, Maryland (about 2 1/2 hours from Baltimore). Michael is the guy on the right with the glasses. Bill Warren, the man on the left, is the senior pastor of Memorial Baptist Church. bill and michael 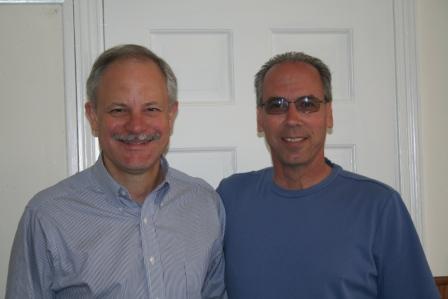 I was so excited about Michael’s attempt to reach out to his new neighborhood for Jesus that I asked him to write his testimony down. Michael Sove writes:

My adventure began in March as my wife and I signed a contract on a new townhouse in Fruitland, Maryland, which was contingent on the sale of our condo in Ohio. I was called one year ago to be the Cell Champion at Allen Memorial Baptist in Salisbury, MD. We have grown in one year from nine cells to twenty cells with three more getting ready to launch in the next month. Our cells are called “Neighborhood Life” as we want to bring the life of Christ into our neighborhoods.

Our condo sold at the end of March and we got approved to build our townhouse in a new community called Cedar Commons. The target date for moving in would be the middle of July. This was very exciting because we would be some of the first residents to live in this new housing development. The plan was for seventy nine townhouses, fifty duplexes and 27 single family homes. From the moment I sensed God wanted us to build in this community my wife and I began to drive over daily to pray over the land, asking God for His favor in this community and the opportunity to influence this whole development for Christ.

When we moved in on July 17th there were only five other families currently living at Cedar Commons. I began to take a prayer walk every morning and evening. I continued to ask God for His favor and the favor of the residents. As I walked and prayed I promised the Lord that I would never walk by a person without talking to them and befriending them. The Lord has been faithful and has allowed me to meet every person in the community. There are now fifteen families and God is opening a whole world of opportunities to minister to these families.

Shortly after moving in I had an open house and invited some church friends as well as my neighbors to come celebrate with us. I went around and invited neighbors in person and if they didn’t answer the door, I left a flyer giving the invitation. Four new families showed up including a young woman who, after meeting William Warren, the Senior Pastor, and I, started crying and said, “I need God and now I know why I came to your house.” She has been at Celebration and Cell ever since that day. My next door neighbors weren’t attending church together and they have connected with us as well. The stories go on and on.

My neighbors who are Christians have now caught the vision for claiming our neighborhood for Christ and are excited about the cell group I’ll be planting in our development on Nov 7th. As I meet people in the neighborhood I tell them about my vision for bringing people together and how I’d like to throw a monthly party for that purpose. Everyone seems open to the idea and are all excited about this and a few have begun to offer their help and homes as well. I just held my first monthly party, a cookout and invited all fifteen families to attend. Three families were out of town but eight attended. What an awesome day we had together!

At this party I discovered many new bridges to my neighbors. Next week I’ll be golfing with one; this Friday we are going to another couple’s house to teach them a new board game. The following Friday we will attend a football game with a single mom whose son is on the local team. The open doors are limitless and I have never experienced this level of openness in all my years of ministry. I directly relate it to prayer walking and making myself available!

One story is worth repeating and reflects what God is doing. Last week a new family arrived and I noticed they were from California. I try to get to newcomers within 24 hours simply to introduce myself and welcome them to the community. So my wife and I stopped by and introduced ourselves. While standing in their driveway my wife noticed a MOPS (Mothers of Preschoolers – a Christian ministry) sticker in the car window. We found out that their furniture wasn’t due until the following week. On my way home from our celebration services the next day the Holy Spirit prompted me to go over and offer to help the neighbor put in his garage door opener which was laying on the garage floor. He thanked me for the offer and said he couldn’t put it up because he was missing a bracket. It was then that the Holy Spirit gave me another prompting. I said to my new neighbor that he had two choices for dinner, he could either take his family out and pay for dinner (I was looking at an empty house) or come over to my place for free pizza.

He was thankful for my offer and sure enough they called shortly after. As we stood over the pizza that evening I asked if it would be okay if I prayed before we ate (I always ask when I’m unsure if they are Christian) and they said that was fine. As I closed my prayer their little seven year old belted out “Amen!” I now knew I was probably standing with new neighbors who were Christians. The next two hours we shared testimonies of God’s work in our lives and really knitted our hearts together. They told me that their neighbor who I had reached out to previously had invited them to attend my cookout the following weekend. Like I said, the neighborhood is working together. Yesterday they came with their two children and had a wonderful time meeting all the other neighbors.

This morning I received a call from one of my neighbors saying that the family called her and said they had to take the two year old to the hospital because of some medical problems and asked this neighbor to call me for prayer. Not only was I able to go to the hospital and pray over this mother and child, my other neighbor is going to watch the other child as the father goes with me to the airport to pick up a friend who is flying in from the west coast to help them at this time. I also sent this prayer request to all the cells in our Church. God is doing great things at Cedar Commons!

I want to challenge all of you to consider what you could do in your neighborhood as well. It’s nice being in a brand new development but there is nothing stopping any of you from walking through your neighborhood, praying as you go and asking the Holy Spirit for “Divine Encounters.” Walk – Pray – Talk, you can claim your neighborhood for Christ as well!