Before I spoke to one hundred small group leaders during a Saturday seminar, the lead pastor said to me, “Don’t teach about worship as part of the small group order. We don’t practice worship in our groups. It’s too much of a hassle to prepare the worship singing, and after all, our small groups are primarily for non-Christians.”

“Okay,” I nodded outwardly, while inwardly wrestling with this new revelation. I understood that a certain number of groups might not have worship, but to exclude worship from all of the small groups?

Some believe, like this particular pastor, that to attract unbelievers, it’s best not to appear too Christian and especially to avoid worship singing, which might make unbelievers feel uncomfortable. But is this true?

In our new book, Groups that Thrive, Jim Egli and I asked those taking the survey (4800 altogether) whether they included worship singing in their small group. We were curious if including a time of worship would impact small group growth, particularly evangelism.After all, unbelievers don’t know Christian worship songs. Does worship singing make them feel uncomfortable and hinder outreach?

A large percentage of the groups said they did include singing and worship (77%). And the groups that worshiped grew faster than the ones which did not. Worship singing positively affects the visitors, and those groups that included worship were also more effective in evangelism. 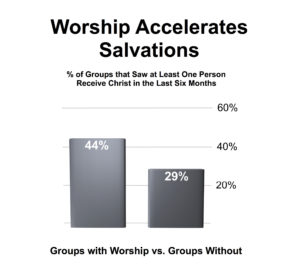 From this, we can conclude that worship is not a barrier to visitors, even though they might not be familiar with the songs. Evidently, the presence of God experienced in worship can be felt by these new people and it helps draw them to the group and to Christ.

Groups that thrive focus on Jesus. When people experience Christ’s presence and love, they sit-up and take notice. The most effective evangelism is to lift up Jesus and allow Jesus to minister to people. In fact, we recommend including as much worship as possible. Bring God into the picture and you’ll welcome unbelievers.