By Joel Comiskey, check out  coaching 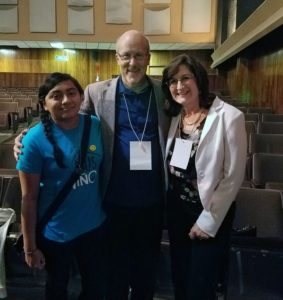 children’s cell. One of them was Jenny. I had written her story in my book, Children in Cell Ministry, but I met her for the first time at the conference.

Jenny was sent to open a children’s cell in a very poor house in the center of San Salvador. An older lady and her eight-year-old grandson, Leonel, lived in a small, messy house. The neighborhood children packed the house to overflowing each week. Jenny recalls the messiness of the home and lack of space as the children crammed in each corner to hear God’s Word, memorize Scripture, worship God, and pray together. Leonel’s rooster would often peck at Jenny as she gave the lesson. Despite the difficulties, Jenny pressed on for the sake of the children.

Jenny noted that Leonel was very depressed and sometimes spoke about not wanting to live anymore. Jenny asked if something was wrong, but Leonel always avoided talking about his problems. Over time, and after talking to the grandmother, Jenny pieced together Leonel’s history. Leonel’s mother was impregnated at the age of thirteen by a gang member and turned Leonel over to the grandmother. Leonel’s father had to flee the country, and Leonel never heard from him. He had only seen a photo of him. To survive, Leonel and his grandmother tried selling roasted bananas on the city streets.

The good news was that Leonel received Jesus in the children’s cell and began the process of discipleship week after week. He memorized the verses and faithfully attended each meeting. Leonel’s mood changed dramatically, although he would sometimes become discouraged because of his living conditions. Many of the neighbors around Leonel were gang members, and Jenny knew he was vulnerable. She gave Leonel special attention, praying fervently that he would stay strong. She asked him to help her in the cell, which made him feel important
and needed.

Leonel did make it through those difficult times. He’s now seventeen and testifies of God’s grace in his life. “Before I didn’t care about even living, but now I have a new purpose in life,” Leonel says. “Jesus is my priority now, and he’s helped me to avoid the mistakes of those around me.” Leonel now attends an Elim youth cell as well as the weekly celebration services. He is currently finishing high school and his dream is to study mechanical engineering in college. He’s polite, respectful, and a trophy of God’s grace—someone who was rescued by an Elim cell group in the dark, broken city of San Salvador.

Whether you’re a pastor, cell leader, or member, the power to persist in ministry—like Jenny—is the result of spending daily time with Jesus Christ. Having a consist daily devotions and then praying without ceasing is the formula for successful life and ministry.