I’ve been coaching one church in cell ministry for approximately two years on the telephone. Finally in October 2008, I had the opportunity to teach a seminar in their church. I’m referring to Allen Memorial Baptist in Salisbury, Maryland. Bill Warren (senior pastor) and Michael Sove (cell champion) are doing a great job of transitioning a traditional Baptist church to the cell church strategy (about 600 worshippers and 28 cell groups).

This church hasn’t arrived. They’ve struggled and are struggling–like all churches. Transitioning this church is especially difficult because it has a 100+ year-old history.

Here’s an important lesson I learned from my time with them: Go with those who are running with the vision. Another version is: “Find your Eddy.”

Not long after picking me up from the airport, Michael and Carrie Sove started telling me about Eddy. “He will Eddysoon be a pastor in our church,” Michael said. “He’s not only multiplying cells, but he’s positive, has excellent people skills, and is totally committed to the cell vision.” 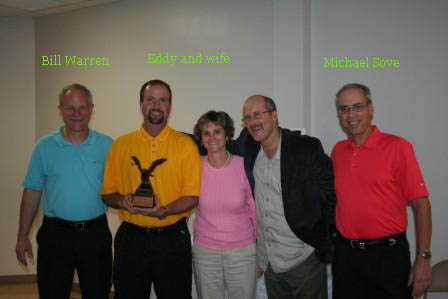 Here’s an interesting fact: Eddy has only been running with Jesus for one year! God used the cell group and the Encounter Retreat to transform him (delivered from drugs and alcohol). He moved from associate to cell leader to multiplication leader. He’s now planning his second multiplication and has a vision for 50 future cell groups. Eddy is young enough in the Christian life to bypass the tradition that says he can’t do it.

Michael Sove is spending loads of time with Eddy, because he sees his potential. Michael knows that Eddy’s fruit will inspire confidence in others, showing them that they can do it too.

I’ve seen this same strategy used over and over in the growing cell churches around the world.

Find your Eddy and run with him (or her)!