Recently I taught my first webinar. I discussed my book Leadership Explosion (webinar was sponsored by Leadership Network). I had the chance to reread my book Leadership Explosion in prepration for the webinar. LE highlights the fact that the heart of the cell church movement is raising up an army of leaders who will reap the harvest. The thesis of the book is that making disciples who make disciples is the heartbeat of cell ministry (i.e.g, leaders who make other leaders). I repeatedly say in the book that the cell church LEADERSHIP explosionmovement is not about the cell. It’s about how leaders (disciple-makers) are developed in cell ministry to serve Christ’s body and evangelize the world. 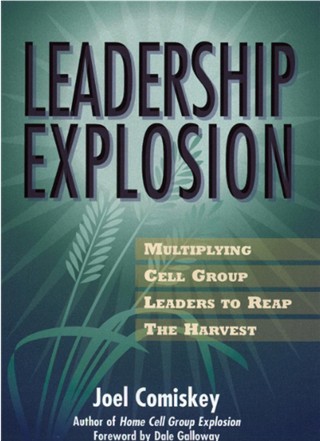 LE was published in 2000, and I’ve had seven years to reflect on thecontents. Granted, I would rewrite some parts of it today. Yet, other sections encouraged me to press on to view leadership deveopment at the heart of cell ministry.

The following four paragraphs comes from the introduction:

So often we see the multitude but don’t contemplate their awful state. Jesus did more than analyze the condition of the lost. He had compassion on them because “. . . they were harassed and helpless, like sheep without a shepherd” (Mt. 9: 36). Yet, this compassion stirred Christ to exhort his followers to, “. . . Ask the Lord of the harvest, therefore, to send out workers into his harvest field” (Mt. 9:36-38). We can’t reap the harvest alone. We need help. This book is about raising up leadership to reap the harvest.

“The growth of the cell movement is based on raising up leaders from within. The highest priority of the cell leader is to identify prospective interns and begin the mentoring process.” With this quote, Gwynn Lewis pinpoints the purpose of this book. Cell leaders are not primarily called to form and sustain cell groups; their primary job is to find, train, and release new leadership. Jim Egli expands on this same point: “The cell model is not a small-group strategy; it is a leadership strategy. The focus is not to start home groups but to equip an expanding number of caring leaders. If you succeed at this, your church will flourish.”

I agree with the above comments today just as much as I did when I wrote them seven years ago. I’ve learned that raising up harvest workers in the WEST is more difficult than in the majority world, but the same principles hold true anywhere in the world. Jesus is looking for harvest workers and cells provide the best atmosphere for leaders to develop and spread their wings.

Below I quote three more paragraphs from Leadership Explosion:

I believe in church growth. My core church philosophy centers on church growth theory, and I believe that God wants His church to grow in both quality and quantity. If the major focus, however, is how many people attend on Sunday morning, a leadership void can occur.

When a church primarily focuses on Sunday morning, the people feel like they’ve fulfilled their purpose by showing-up on SundayLEADERS. The goal is Sunday attendance and members hear this in many subtle ways. A church, without knowing it, can produce a grand multitude that keeps shifting as people shuffle in and out. The back door is often as large as the front door and in the meantime, few leaders are developed.

Peter is a perfect example of this malady. He came to our church after many years in a denominational church that emphasized the Sunday morning service. God had miraculously saved Peter from a life of wild living, but the church found little use for him. When he came to us, we immediately saw his potential. We asked him to enter the training track to eventually become a cell leader. In the meantime, one of our youth cell leaders began leading a group in Peter’s home. We didn’t view Peter as an attendee in our church. Instead, we saw him as a potential leader in the harvest and even a future leader of leaders.

The potential harvest workers are sitting right in front of us. They are sitting in our cell groups and seated in our pews. We need to ask God to give us leadership eyes in order to see their potential. As Rob mentioned in his post yesterday, we need to “scan the ditches.