Some have mistakenly concluded that cell church ministry is only for Pentecostal or Charismatic churches. Think again. In October 2007, I gave a three-day seminar in Tabasco, Mexico, the home of the church called Jesuscristo es la Vida Eterna. This Baptist church has grown to 400 cells groups and 3,000 people. The church baptizes 100 people per month and has grown at a 50% rate since starting their cell church vision several years ago. tabasco 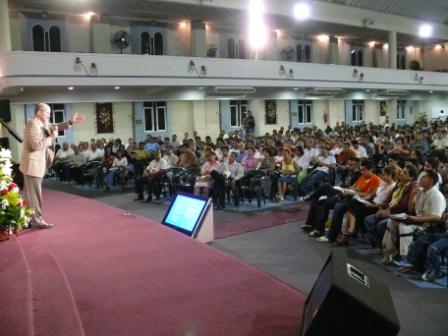 The church had about 120 attending before they started transitioning to the cell church in 2002. Much of their cell philosophy is patterned after the ELIM Church in El Salvador. Like Elim, all cells have a weekly planning meeting in which they talk about who they’re going to invite to the cell, who they need to visit, etc. The cells meet on Thursday, Friday, or Saturday and are very evangelistically focused (they do follow the Sunday morning sermon).

Each cell group is given a one-year goal to multipy, complete with a folder that has the exact month to multiply. Each member is encouraged to invite one non-believer each month.

This cell church is opening new doors for cell ministry among the Baptists throughout Mexico. 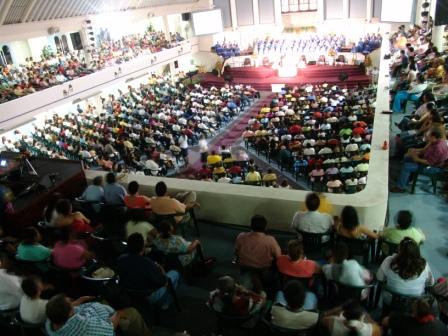 The founding pastor of the church was Enrique Ochoa Dueñas. Enrique received Jesus in 1980 and his life was transformed. Stories are told about how he was so onfire for Jesus that he would often spend hours sharing the Word with whomever would listen. JOELHe did the same with his children. They told me that their dad would often explain Biblical insights to them for hours at a time, and that they would look for a way to escape from his preaching. Yet, Enrique’s fire rubbed off on his kids.

Pastor Enrique died in 2003 while in the ministry. He died three years after establishing the cell church vision and helping the leading the church to grow to 700 people.

The wonderful thing is that his children now pastor the church. Pastor Carlos the fourth-born is the lead pastor. Pastor Alejandro, the third born is the cell champion. The first-born, Rafael, concentrates on missions. The second born daughter, Patricia, is also in fulltime ministry and leads the music ministry. And the mother is totally dedicated to church life.

The children follow the vision of their father in that none of them receive a fulltime salary, even in a church so large. Pastor Enrique always worked outside the church becuase he felt that he should contribute financially to the church, just like everyone else. The children receive some support from the church but not all of it. They believe they need to be tent-makers and volunteer much of their time to the Lord.

I was super impressed with how one man’s fire (pastor Enrique Ochoa Dueñas) could bear such amazing fruit even after his death. Would to God that our fire for Jesus would influence our children to serve HIM all the days of their lives and make an impact for Jesus!